When you think of farming in the Adirondacks, you might not think of the choppy grain fields. New England was the “breadbasket” of the United States until the late 1800s. World markets drove out local grains. Flour is flour, right?

Many cereal farmers and “breadheads” would totally disagree. Have you ever had cornbread made with freshly ground cornmeal? Or ate a shortbread biscuit made from freshly ground buckwheat? The difference in flavor, nutrition and community impact is significant.

Indigenous people have grown their entire diet in the Adirondack region for thousands of years. This included grains like corn or flint corn which are dried, ground and traditionally eaten in corn porridge, corn cakes and porridge. There is evidence that the Haudenosaunee of the Adirondacks had been growing corn or flint corn as part of “three sister” gardens, along with climbing beans and winter squash since a very long time before the arrival of European settlers.

After European settlement in the 1600s, settlers grew corn, beans, wheat, rye, barley, oats, and flax. for home use on farms and subsistence farms. Like most foods, farmers and families grew a small patch of grain in their vegetable garden for their own use throughout the year. They took their harvested grain to the community’s grain processing mill, or “grainerie”, to grind it into flour.

During the 1700s and 1800s, agriculture in upstate New York was dominated by wheat and grains. Buckwheat in particular was an important crop in the southern Adirondacks. It wasn’t until the late 1800s, with the increase in rail and sea transportation, that competitive national markets caused upstate New York farms to turn away from growing grain. Similarly, in Vermont, during the 1800s, more than 600,000 bushels of grain were commercially harvested annually. This number dropped to less than 20 bushels in home gardens years later.

After local grain fell out of favor, expensive equipment and facilities for harvesting, drying, grinding and storing grain became obsolete. Without the necessary infrastructure and market demand, this has made it a more expensive and difficult crop for farmers to grow. However, this is changing with increasing demand for local foods and regional efforts to bring back local grains. At the start of the COVID-19 pandemic, as homemade baking and panic buying emptied shelves of conventional flour, consumers began to take notice of more stable local grain markets. Organizations like the Northeast Grain Basin Alliance and Association of Northern Cereal Producers are working to revitalize local grain economies in the Northeastern United States.

How cereals are grown

When we talk about grains, we broadly mean things like wheat, oats, corn, buckwheat, or barley that are grown for human consumption. Usually grains, such as wheat, are the dried pod harvested from a plant. Today, China is the leading wheat producer, followed by India, Russia and the United States.

Wheat can be sown in spring or fall. First, the soil is prepared and amendments are added, such as composted manure. Then, farmers use a tool called a seeder to plant the seed. This tool is usually attached to a tractor and plants the seeds at a constant rate for ideal spacing and coverage.

Then the wheat grows. At first it looks like grass. Eventually it grows and develops seed pods. Once the plants begin to dry out, farmers use a tool called a combine harvester to harvest the crop. A combine harvester is a large machine that both harvests the pods and separates the edible parts of the plant from the inedible parts of the plant. From there, the wheat kernels are sent to a mill, where they are ground into flour.

Although there are fewer grain farmers in the Adirondacks, they are certainly not obsolete. We are so lucky to have an organic grain producer in Essex County. The Wrisley family of Adirondack Hay and Grain grows certified organic grain for food, feed and fuel. They grow an assortment of crops, ranging from hay and animal feed to buckwheat and wheat.

You can see the wheat being harvested from their farm below.

This month, Dan Rivera of Triple Green Jade Farm in Willsboro, NY shared his knowledge of local whole grains in a webinar with the Adirondack Experience Museum on Blue Mountain Lake and the Albany Public Library. Dan and his partner Kimmy run a bakery on their farm and sell their breads, crackers and pastries at local markets and through retailers. During the discussion, Dan offered some tips for home bakers looking to use more local whole grains.

You can watch the entire recording from the presentation below.

Dan’s tips for “showcasing wheat” in your kitchen:

Start small with a bread recipe

Another easy place to start is to gradually incorporate local whole grains into a simple bread recipe, as the New York Times famous. No-knead bread for beginnersD. He suggests starting by adding a small amount of whole-grain flour along with your standard all-purpose white flour. 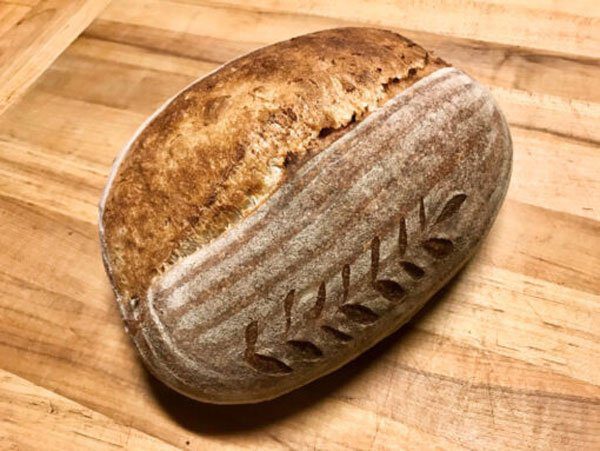 Where to buy local whole grains

Local grains are much harder to find than most things, but they are so worth the extra effort to find them! Some farms in the Adirondacks region grow their own grains, and a few companies use local grains:

For wholesale buyers who can grind their own flour, Adirondack hay and grain and Shoot behind the farm may be an option for them. Locally ground flour, not necessarily locally grown flour, can also be purchased from Champlain Valley Milling, now located in Willsboro, NY. Their flours are available at most regional cooperatives.

Photo above: Grain production at Adirondack Hay and Grain in Essex, NY. Photo by Ben Stechschulte

Mary Godnick is the digital writer for Cornell Cooperative Extension of Essex County. She lives in the Champlain Valley where she grows vegetables on a co-op farm plot with her husband and two rescue dogs. You can read more about her work at AdirondackHarvest.com and follow her on Twitter at @MaryGodnick.

View all posts by →