A transplant from Melbourne, Machi takes the Asian fusion train, located on a Japanese food track. Opened by partners David Qui and michael mi, it is in fact the fourth restaurant owned by the duo, but the first of its kind in China.

Machi in Melbourne started serving in 2012 and has remained a mainstay of the Australian food scene ever since, with Nobu, Ichi Ni and veteran Mr. Miyagi Michael running the kitchen.

The space is notably – and deliberately – small, to imitate a “pop-up” sensation; seating only 22 people, more than half of the seats surround an open sushi bar.

The decor is outfitted in onyx, accented with crimson and copper, with rounded black leather chairs and banquettes along the back wall, beneath a silvery abstract art installation depicting a blue whale.

The menu shares a number of dishes with its sister location downstairs, like the Melbourne Sous Chef, David Zhang, came to run the kitchen here in Shanghai. The dishes lean towards the lighter, with strong undertones of umami throughout – tasty, without being overly filling.

Another bonus for the date night front. 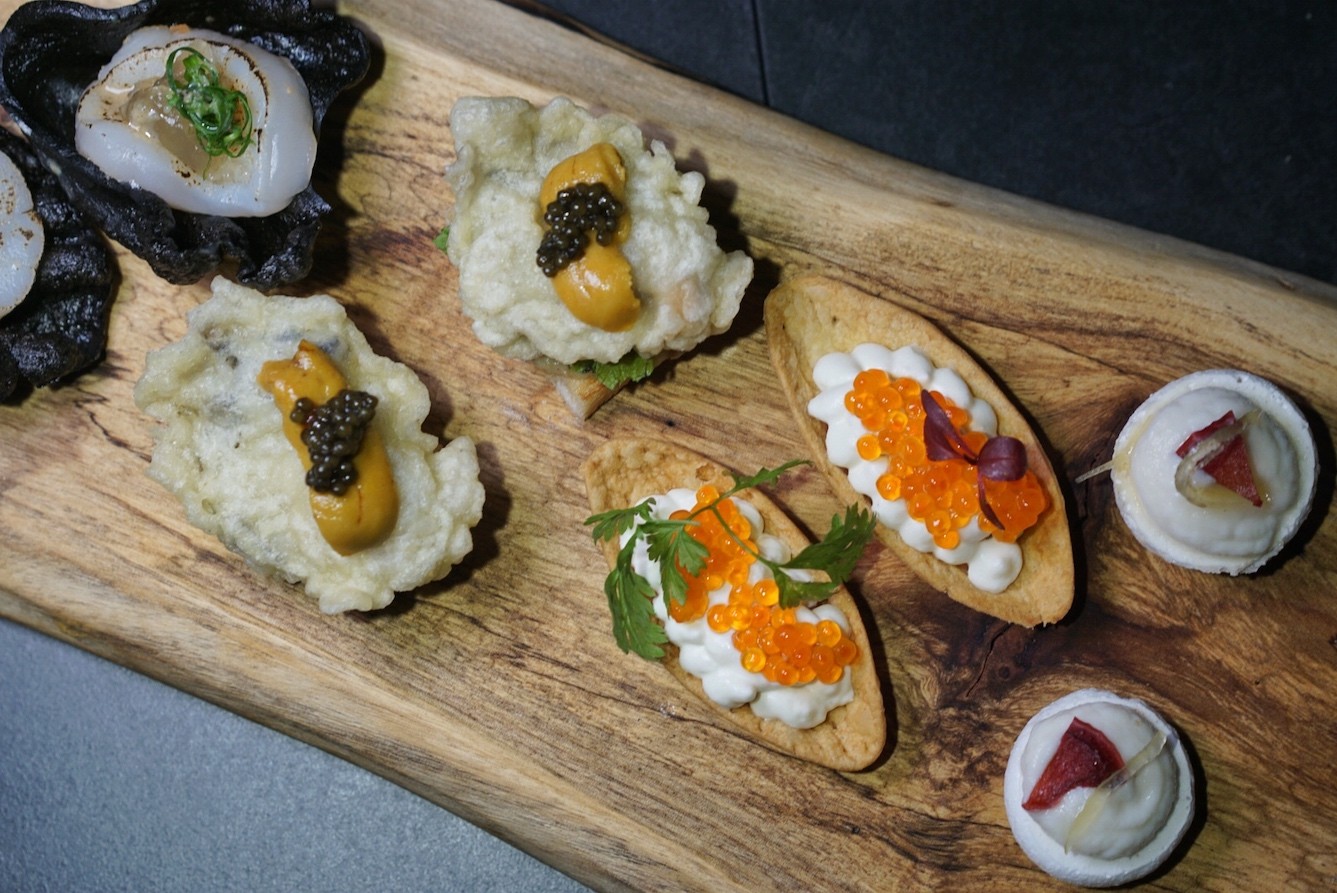 Beginning with a dish “only available in Shanghai”, the Canape Tray (RMB229) presents unique offerings from the last decade in Melbourne.

A seared scallop tataki sits on a puffed squid ink cracker, sprinkled with jalapeño mayo and a lip-wrinkling ceviche sauce.

The next bite ventures towards a breaded and fried oyster topped with a creamy uni over a fillet of grilled and smoked eggplant spread in a thick layer on sourdough bread with miso butter. Adding a herbaceous shiso leaf adds a bright zing and a lingering hint of ginger bite.

Cleansing the palate, the yuzu meringue is accompanied by a lily root pâté with crisp and tangy plum chips.

Finally, the Ikura tartlet sees pearls of salmon caviar explode on a whipped dashi sour cream which, when punctured, trigger a tidal wave of oceanic salinity, juxtaposed with the crunch of fresh watermelon. 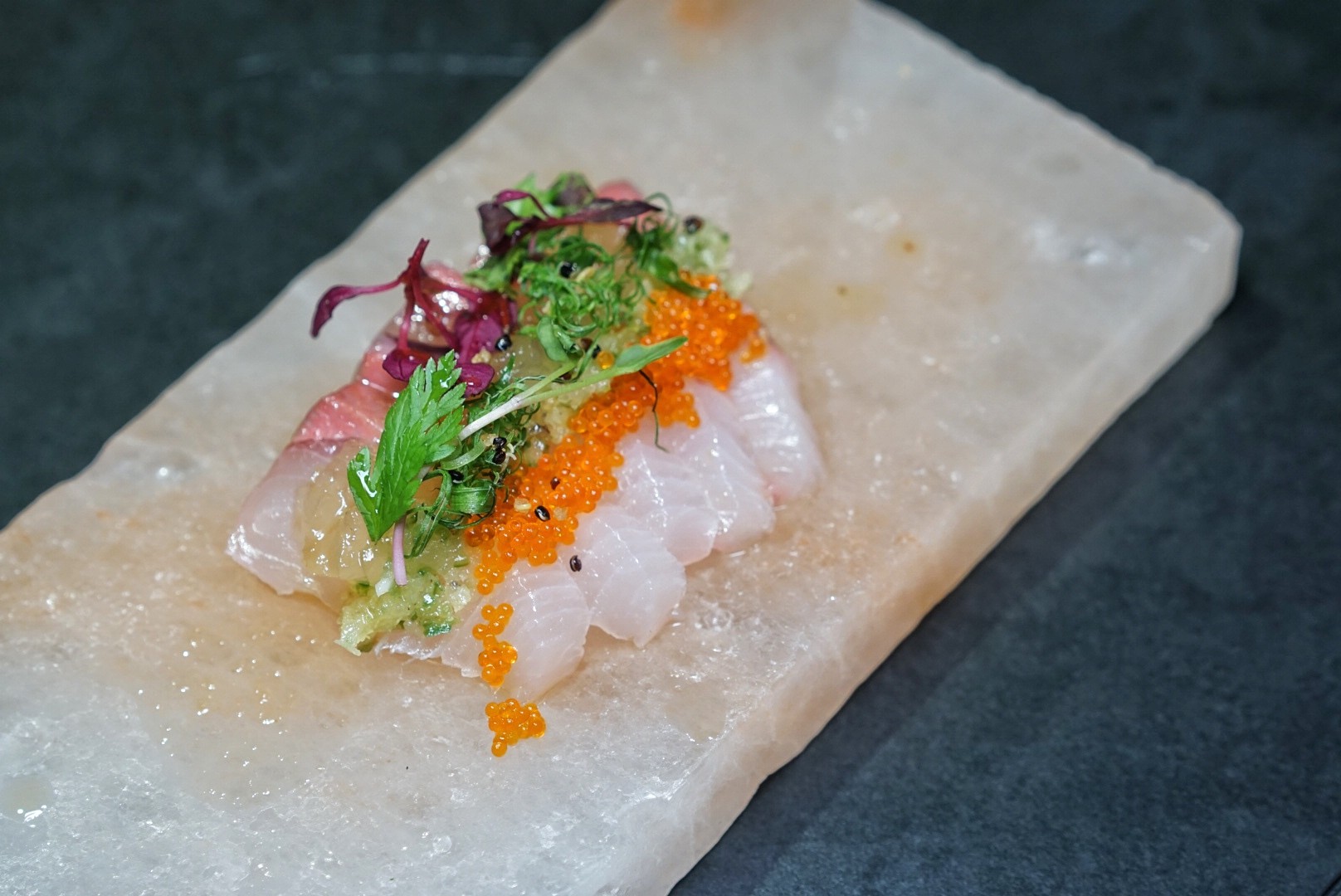 Served on a block of pink Himalayan salt, the Kingfish Salted (RMB78) welcomes a whisk of jalapeño salsa, a drizzle of ponzu and the pleasantly salted pop of deer pearls. 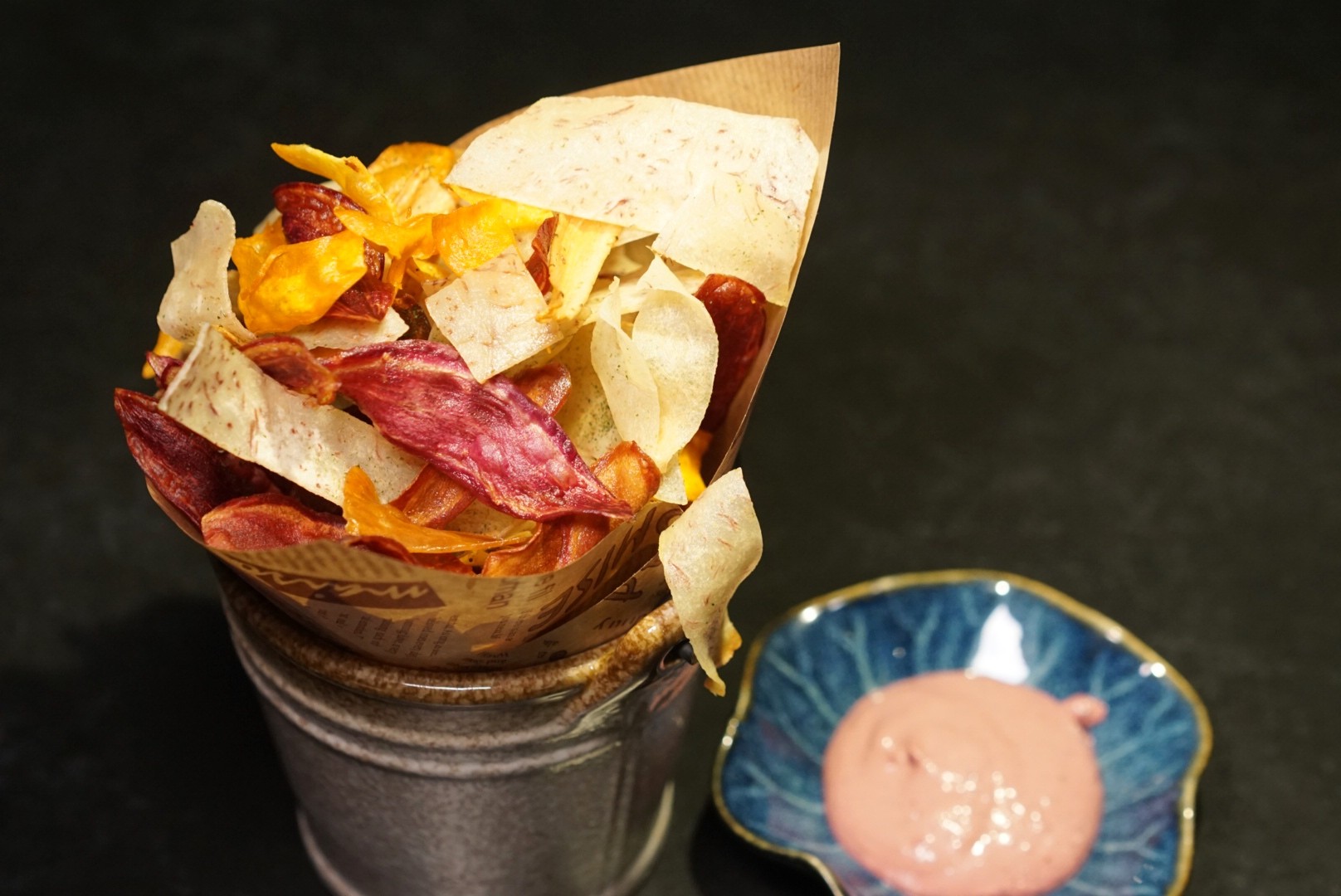 If seafood isn’t your thing, the Vegetable crisps (RMB38) are homemade – sliced ​​fried sweet potatoes, taro crisps and burdock root are sprinkled with furikake and served with an oddly placed blueberry mayo. A traditional aioli would suit the plate better in our humble opinion. 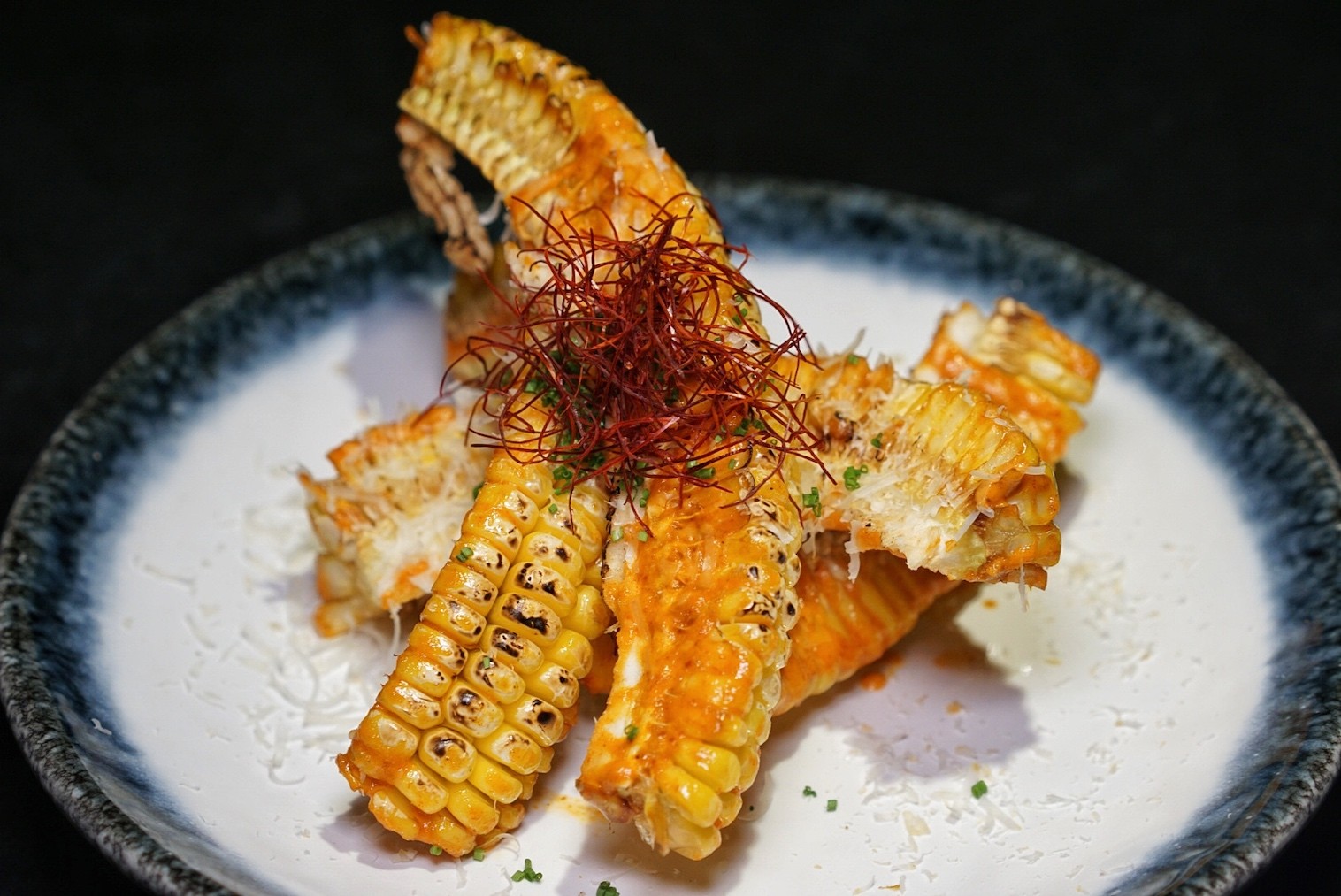 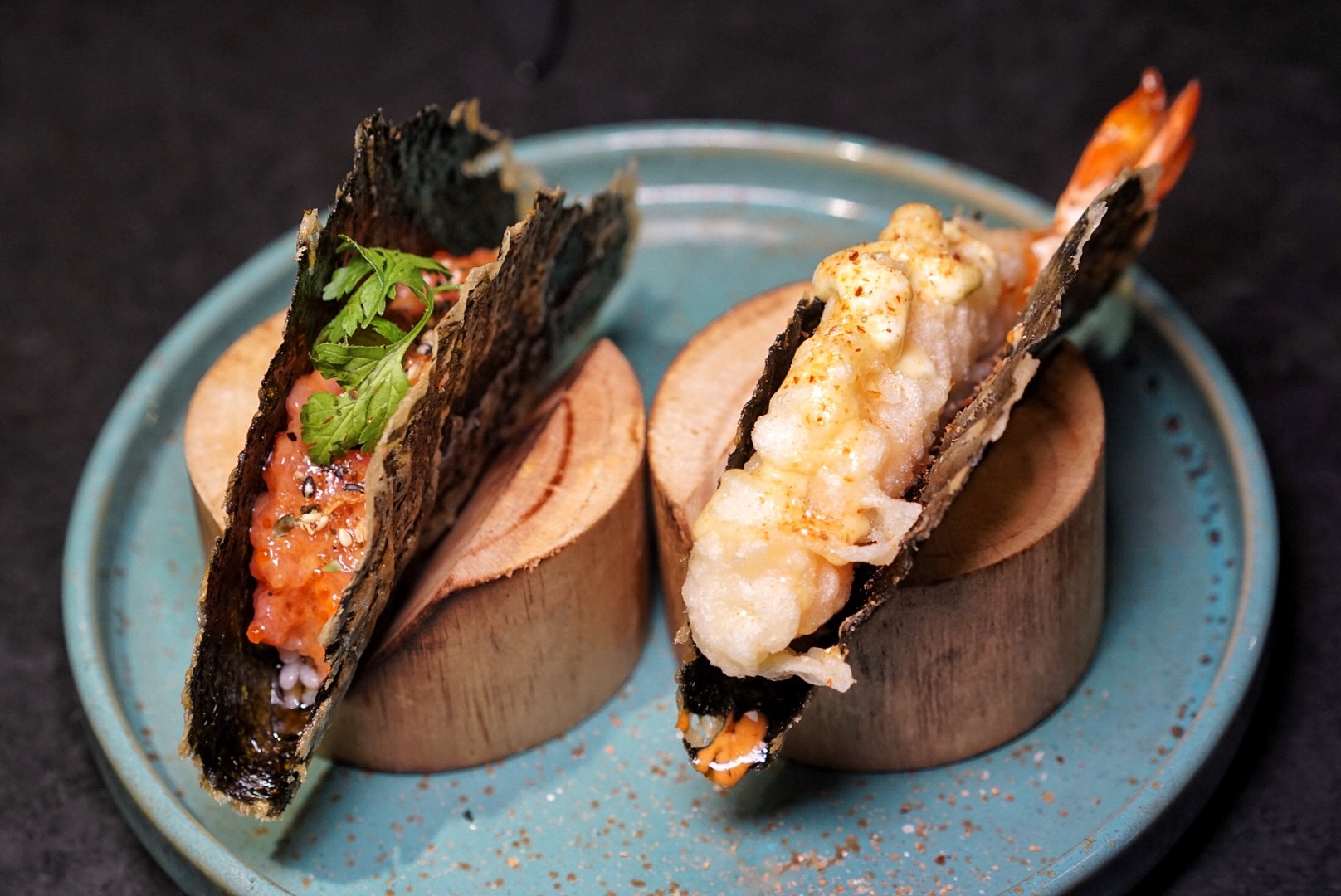 Machi’s best-selling dish – from the very beginning – is its assortment of fried seaweed tacos, encompassing a multitude of ocean dishes: salmon, trevally flambé, grilled eel, uni or cod, to name but a few. some.

Resting on sushi rice, the raw tuna shiny with a light mayo nestles in a seaweed shell breaded and fried in tempura like the Tuna tacos (38 RMB). Our only complaint – give us more of this topping for the optimal fish / rice / shell ratio.

More balanced, the Shrimp tacos (28 RMB) consists of giant tempura prawns, also anchored to the shell by sushi rice with a sweet aioli. 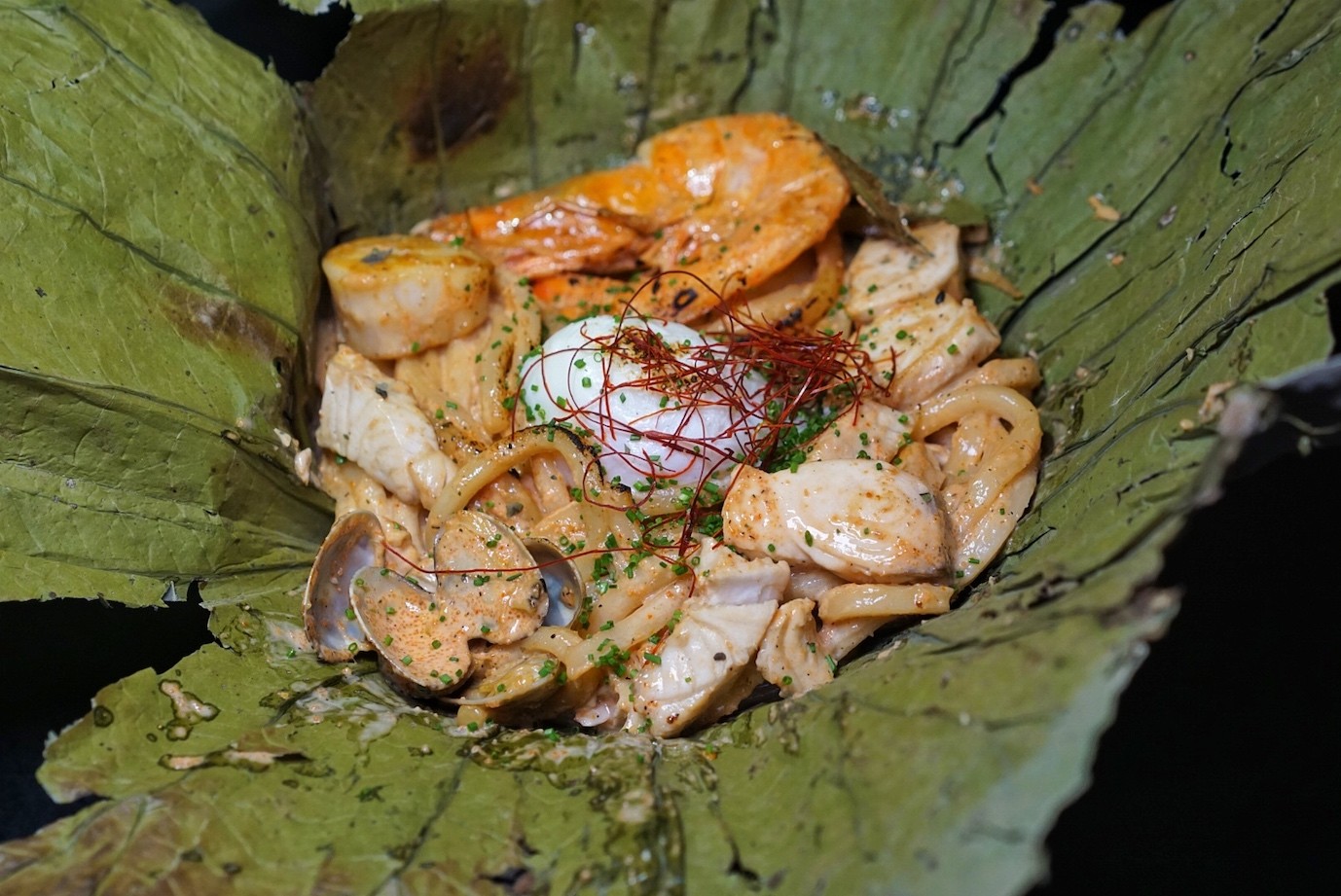 Our personal favorite is the Mentaiko Udon (RMB108), soft, smooth strings in a velvety chili mentaiko sauce, enhanced by a boiled onsen egg that, when pierced, oozes a succulent goo through a spread of green mussels, prawns, scallops and fish – the all steamed in a lotus leaf, unwrapped as a gift at the table. 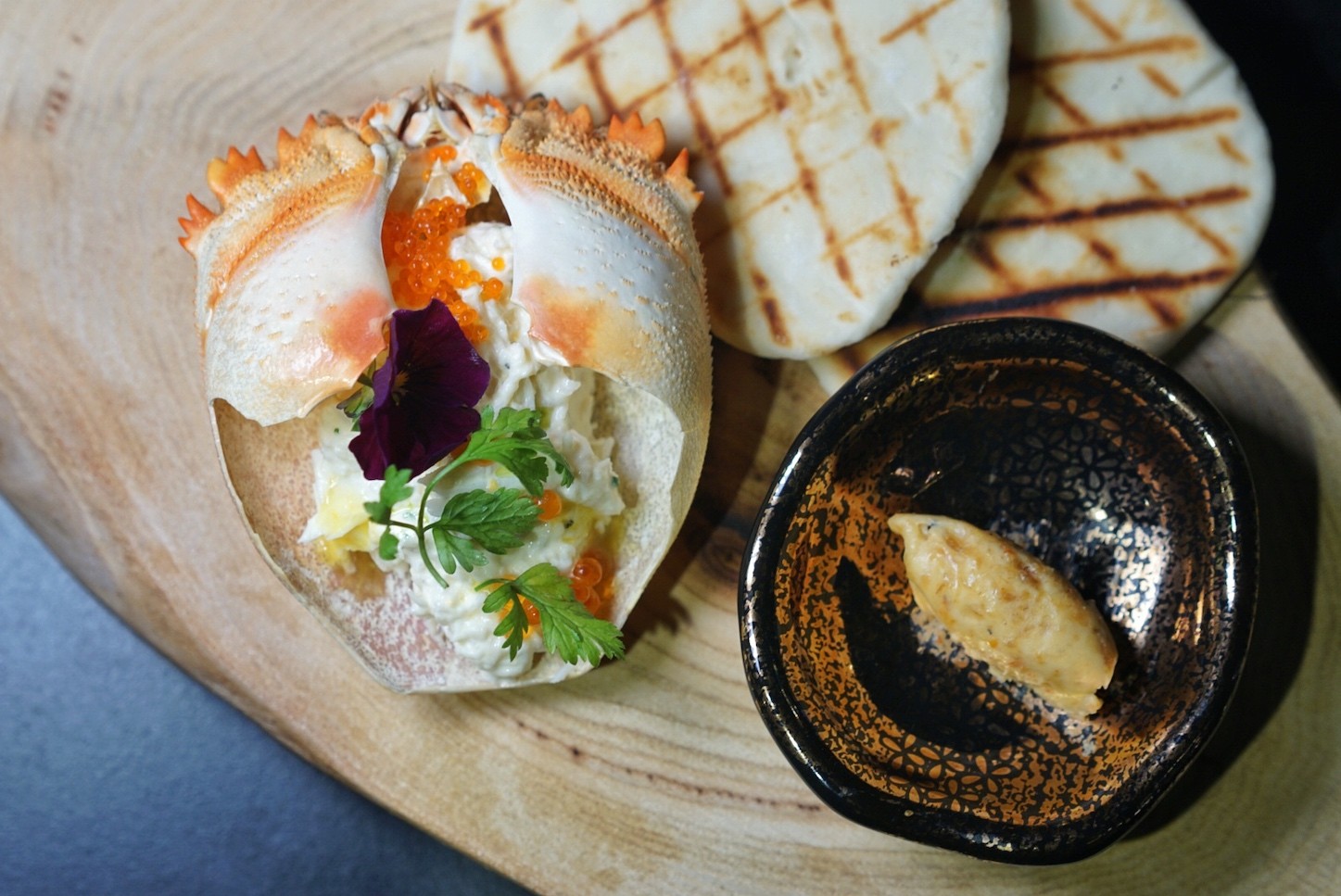 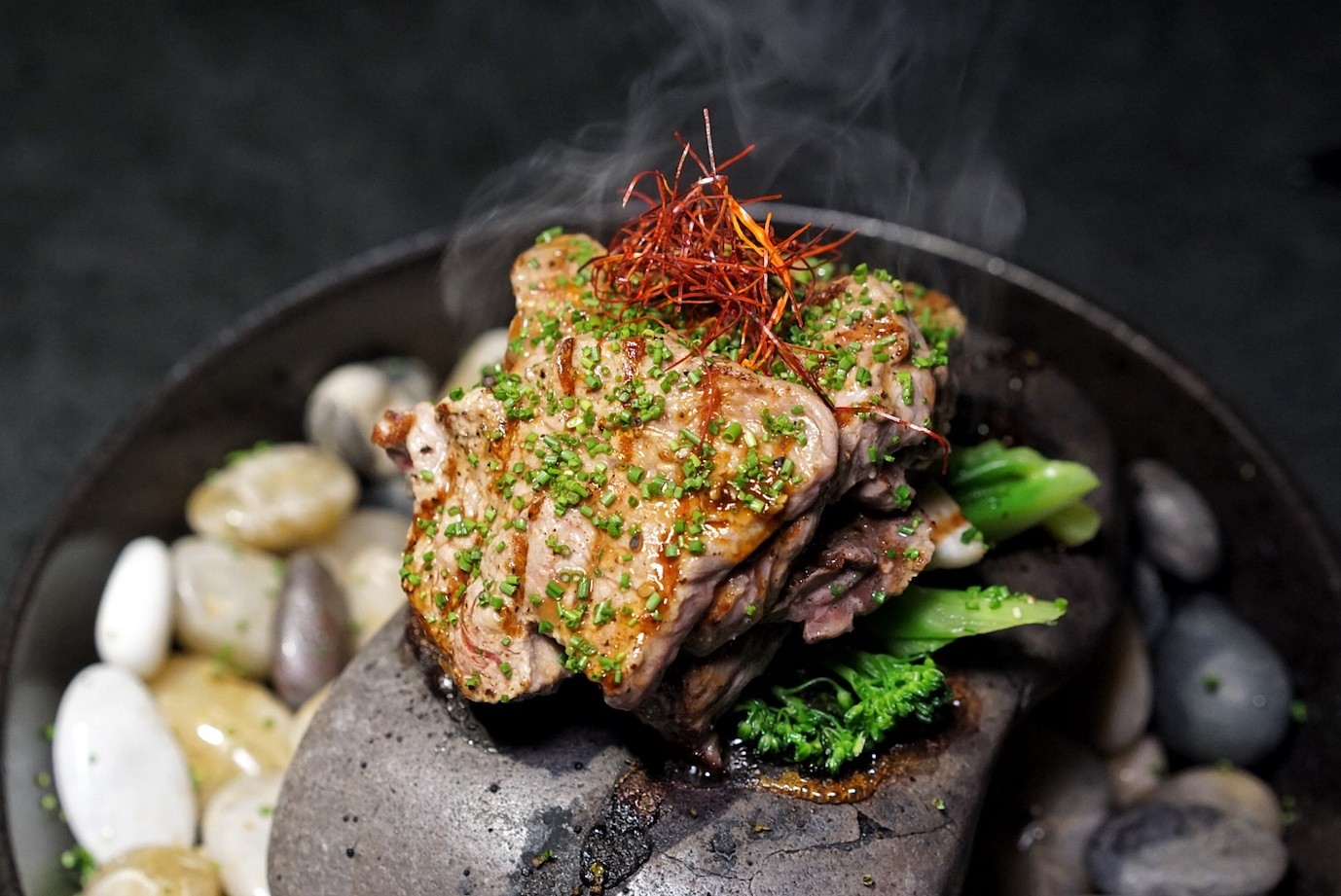 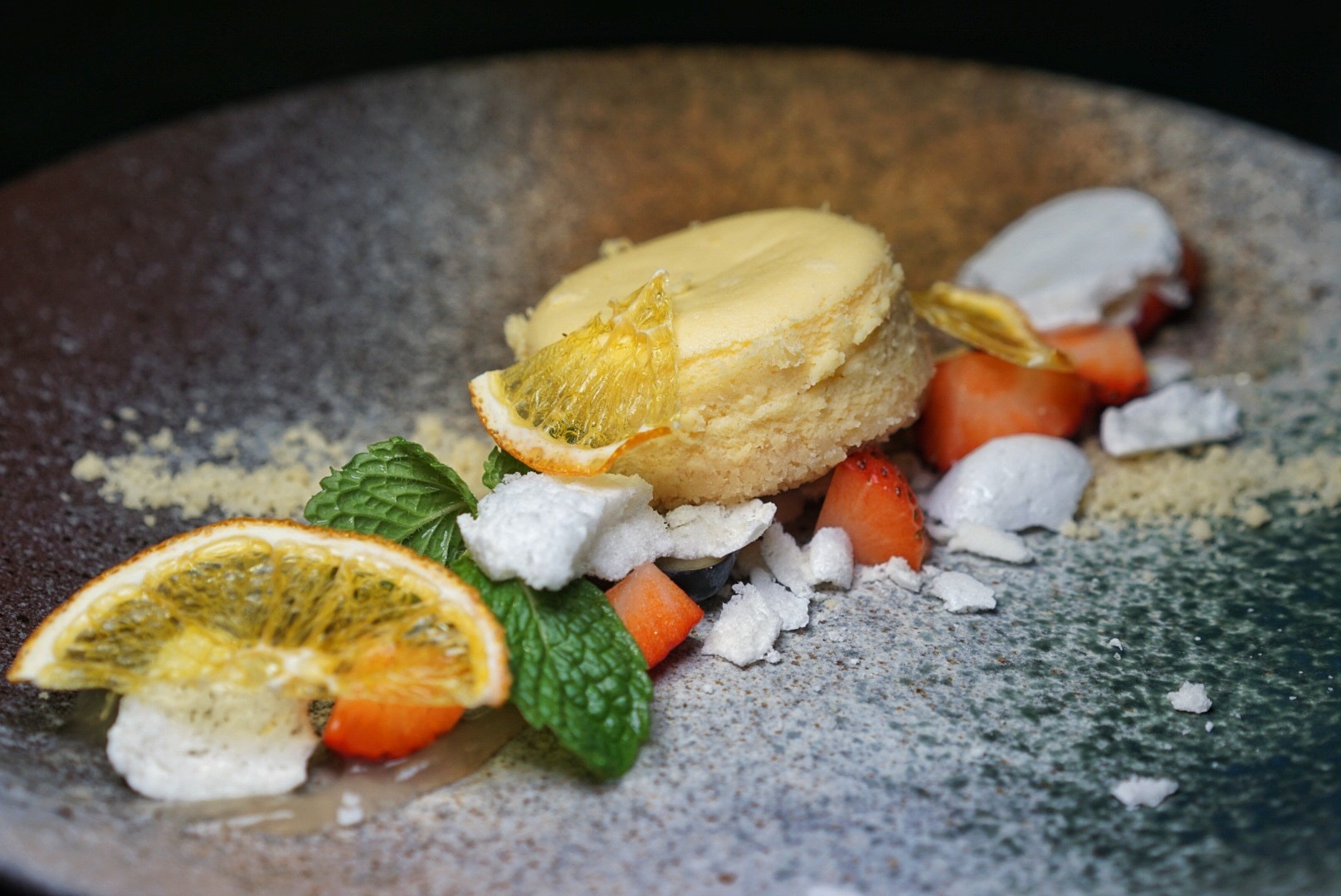 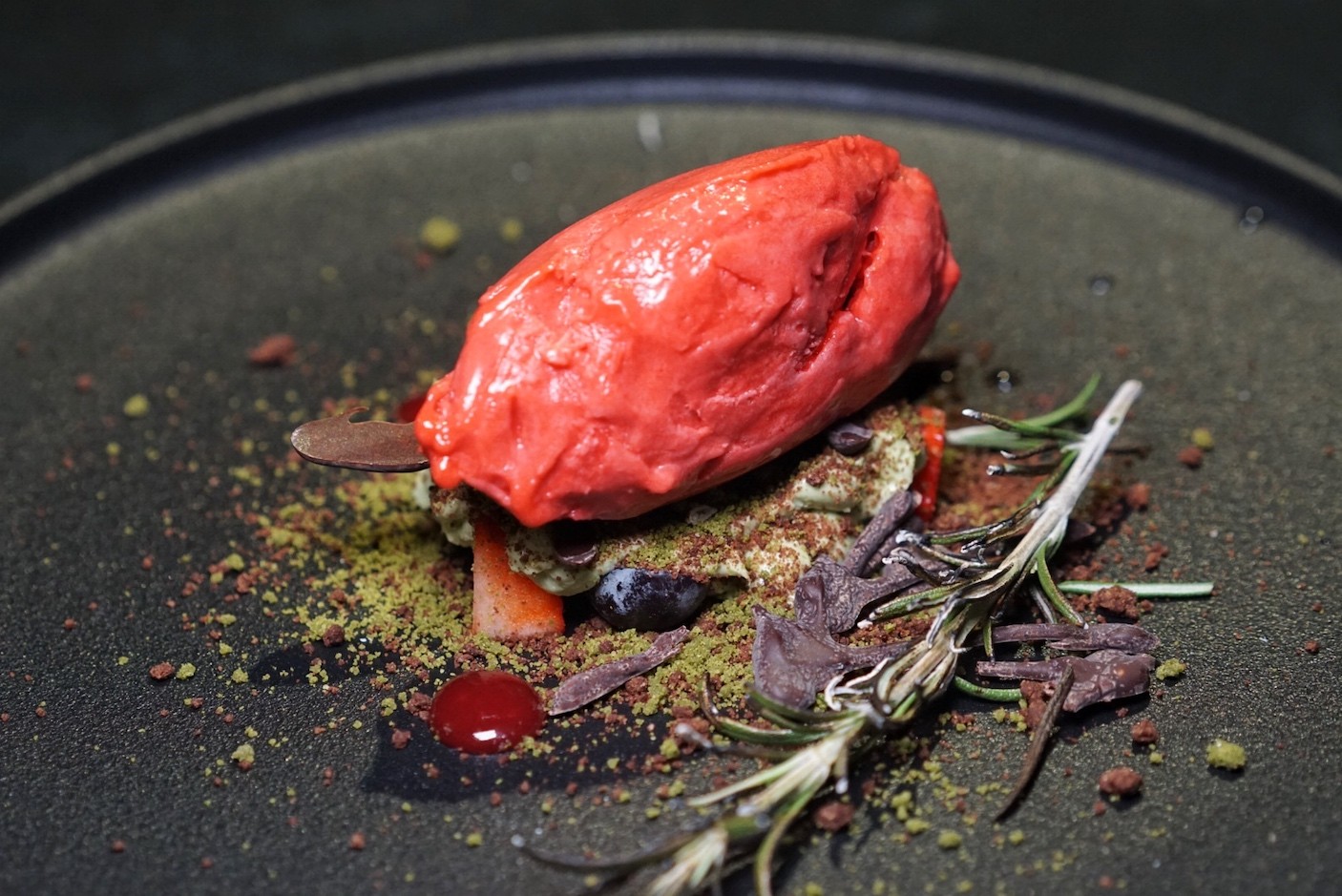 If you are looking for decadent cakes, rich cream or sugary treats, then dessert at Machi is not for you.

The service is focused and attentive, but on a few occasions we had to check what was being served to us. When it’s not entirely obvious, a little explanation goes a long way.

Either way, this is a place for a date. If you bring a friend here, he / she will think that you could – in fact – make an offer, there is no getting around that.

That being said, it is an easy place to bring to impress; it’s sultry, yet simple, with an upscale Japanese fusion to match.