Veteran Nollywood actor, Kanayo O. Kanayo has delighted his fans and followers on Instagram with a video post.

The actor is currently in Abuja and he decided to treat himself to a quick local snack before heading to his destination.

A video shared on his page captured the moment Kanayo and some of his entourage stopped at a roadside vendor to buy some roasted corn and pear.

The actor was quick to thank the woman as he eagerly received his package. Sharing the video with his fans, he wrote: 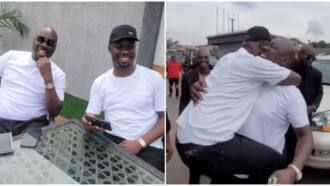 So sweet: Moment Obi Cubana lookalike brother jumped on him as a child after winning primary election

“I love corn and pear. It can make me forget where I parked my car.”

The post rocked its comments section with some fans also talking about their love for the local snack.

Read the comments below:

“I can eat corn to forget myself.”

“Where in Abuja, teacher, I want to come and eat my own maize.”

“Coincidentally, I’m just eating my corn and pear that I bought the other day and piled in my fridge, I love them too.”

“Ancestors sir, whatever you want, na em we go like kwa☝️, but we don’t like ritual ooooo.” 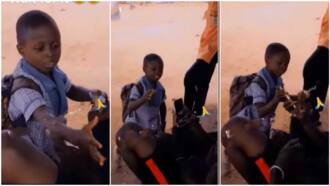 Even if it’s iPhone 12, you won’t take it to heaven – Boy in school uniform tells man in video, people laugh

A fan teased the actor and asked if he was running for office.

“You won a contest for anything?”

Meanwhile, Legit.ng reported that actor Kanayo O. Kanayo took to his Instagram page with a photo of his children.

The beautiful images captured the Nollywood veteran’s three adult sons and the only female in his family.

Fans and colleagues alike were seen in the comments section with kind remarks and words of prayers for the respected actor.